Leading on from our ‘Meet a musician’ series, we thought it was time to ‘Meet a Composer’. This term, contemporary composer and long-term SoundStorm partner, John K. Miles, is our guest blogger – filling us in on his life and ambitions as a composer and music educator.

In this week’s blog, John sits down with us to talk about his career, a piano in a skip, and why he thinks music education matters…

Hi John! For those that haven’t come across your work yet, can you tell us a bit about what you do?

Good question! The short answer is I create music!

The long answer is that I was lucky enough to have a great classical education as a kid through my local authority followed by a place at a music conservatoire (Guildhall) playing the flute. I used to play blues and jazz in my spare time and soon switched to saxophone. This led to being in a top 40 pop band aged 20, alongside a passion to emulate jazz masters like John Coltrane…

I spent most of my twenties practising and playing in jazz venues like Ronnie Scott’s and the old Jazz Café. I also spent hours playing jazz in like-minded peoples’ houses! I released a couple of CD’s under my own name and began to write more and more music.

As well as writing formally scored pieces, I started working with groups of people in community settings such as hospices, prisons, youth clubs, hospitals, and of course schools. This in turn led to many ‘socially engaged’ commissions, mainly for professional UK orchestras like The City of London Sinfonia, but also for organisations like Anvil Arts and of course Soundstorm! 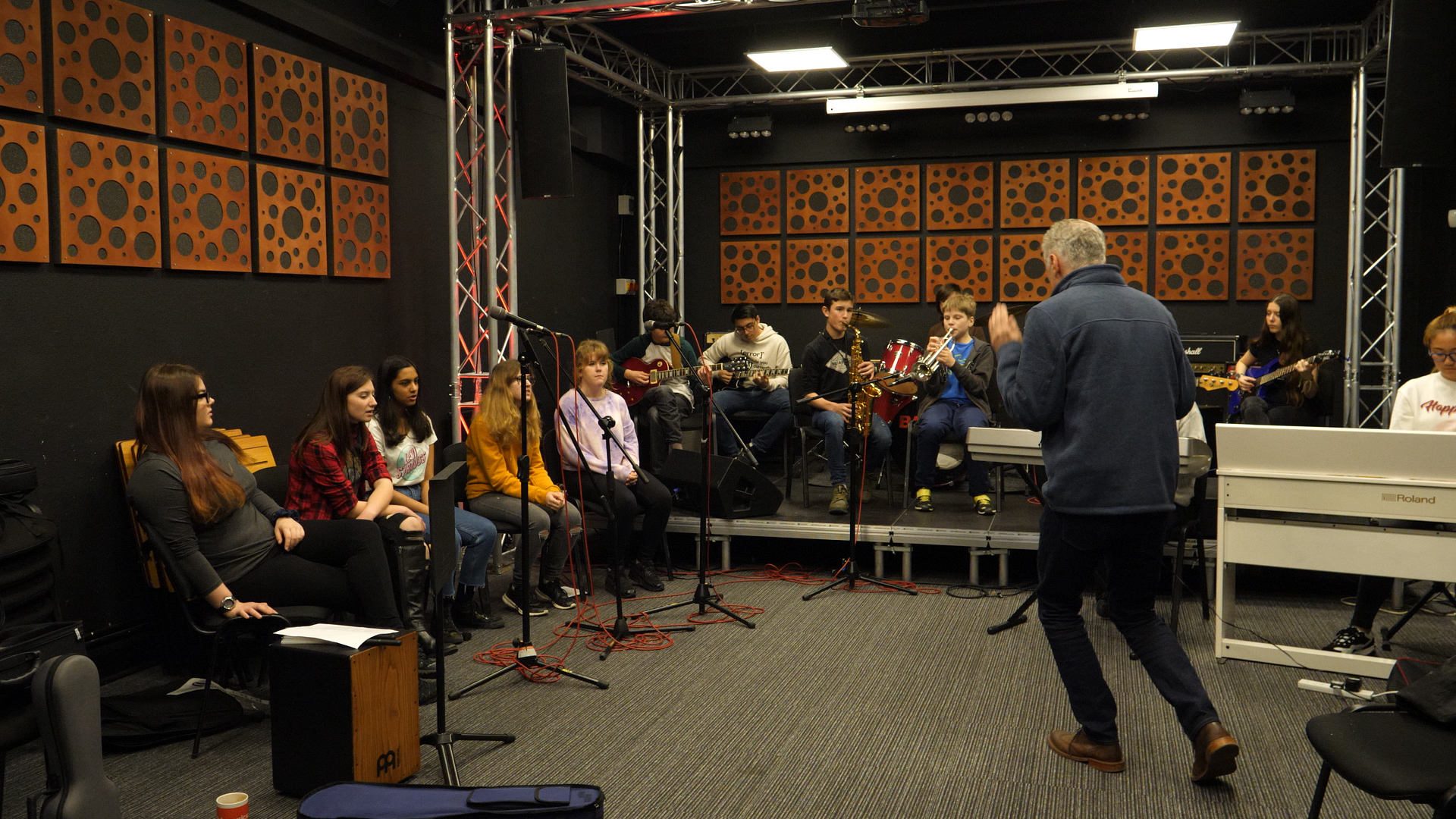 You’ve had quite a varied career – from composing for the Olympics to City of London Sinfonia and the BBC. What’s been your proudest moment so far?

There have been many. Experiences like playing at the Barbican or Ronnie Scott’s, hearing my music on TV, conducting a top orchestra, or bringing together large-scale community projects have all been fantastic, but the deeper privileges have been personal affirmations from people I’ve worked with. For example, when an elderly person in a hospice once shared part of their life story with me and thanked me for the resulting score in a heartfelt way.

Receiving genuine thanks from  collaborators for making a difference to their project is always a proud moment and I’ve also felt a lot of pride when my peers have told me how much they enjoyed a piece or an improvisation.

But, genuinely, the proudest moments come when someone is taking the time to perform the music I’ve written. It doesn’t matter if they are six years old or a seasoned professional; it’s always a pleasure and a privilege.

Can you remember how you first fell in love with music?

My family weren’t particularly musical, but one day, when I was seven, someone put a piano in a skip outside our house. My mum liked it because it had ornate candleholders, so we took it off the skip and put it in the living room. I started having piano lessons, but also spent a lot of time making things up!

My dad was a jazz fan, so I listened to a lot of his records as well as chart music. Later I was inspired by recordings of classical greats like Bach, Rachmaninov, Ravel, and Stravinsky and blues guitarists like Jimi Hendrix and Rory Gallagher. Towards the end of my teens I really got into jazz and listened to everyone I could! Inspiration also came from playing music with other people in youth orchestras and going to endless jam sessions with my friends. I used to ‘sit in’ with professionals if I could and went to loads of gigs.

I know it’s a cliché, but music chose me rather than the other way round! It’s difficult to say when that was, but probably between the ages of 14-16. 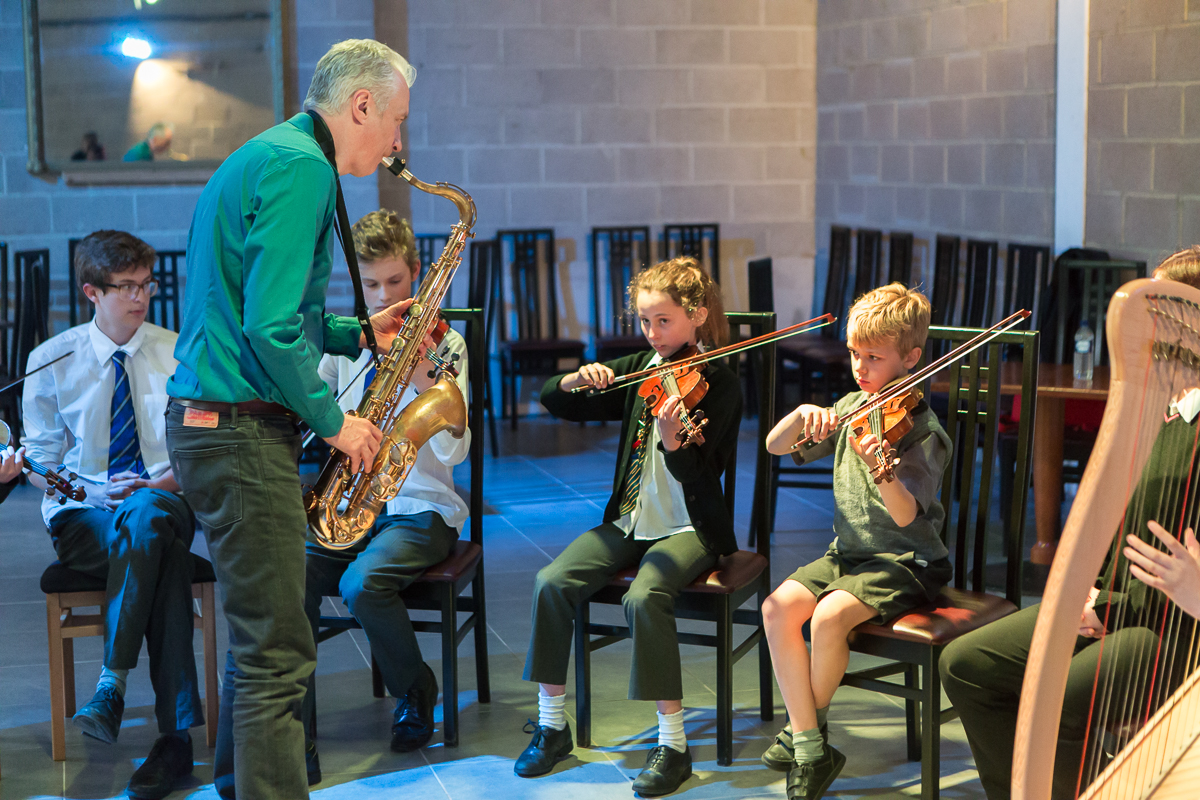 In your opinion, what should the ambition be when engaging young people in music education?

My ambitions for music education are to try and inspire everyone involved on some level. I do my best to make everyone involved feel part of a project in some way, to build a sense of working together with a collective ownership. This can involve contributing to compositions, performing, understanding the compositional process, building an ensemble, shaping a piece, but over and above that having fun!

Not everyone involved in making music will go onto be a professional musician but the attendant benefits of working as a team, confidence building, performing to a high standard, and thinking creatively are transferable and, I think, invaluable.

I would aspire that anyone involved in a high-quality education project comes away with extended personal reference points of what is achievable, and with the confidence to follow whatever interests them.

In our society music is most often used as a tool to sell things, but it can be so much more. It is a powerful tool for community cohesion, health, politics and personal expression. But more than this it is a great thing to have in your life for personal wellbeing and I try and spread the message that this is something potentially available to everyone.

Stay tuned for Part 2 of John’s ‘Meet a Composer’ blog, where John talks about what inspires him as a composer, advice he wish he’d received and some exciting projects coming up…

In the meantime, check out more of John’s work here: https://www.johnkmiles.co.uk/.